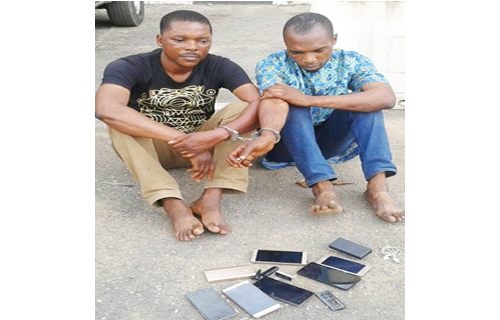 A suspected thief, Idris Owolabi 26, told policemen that weekends were usually the best times he steals from clubs.

Owolabi and his friend, Benjamin Ademola 31, were arrested at Oyingbo area of Lagos State by policemen from the state’s command.

The police said that the two men had stolen several phones from unsuspecting Nigerians and other valuables. The police explained that after stealing these items, the suspects sell them at giveaway prices.

Idris, a professional phone repairer, admitted stealing phones to sell. He explained that he goes to clubs to steal such phones from unsuspecting club members.

His words: “I attend night clubs on Fridays and Saturdays to monitor people. Once I sight someone sleeping, I’ll move close to the person and steal his or her phones. The club I frequented the most is Babylon Club House, located at Oyingbo. My last operation was at Adekunle Villa, which is a three storey building. I went there in the afternoon. I entered the building through scaffolding and stole a phone. Unfortunately, I was caught by the occupants of the building. They called police.”

Items recovered from the suspects are; one Gionee M5, two Infinix Hot 4 phones, one Samsung J2 and a recorder set.

His partner in crime, Ademola, a plank seller, living at Oyingbo area of the metropolis, said that his job was buying and selling of fairly used phones.

Ademola said:  “I know Idris as a phone repairer. I used to buy phones from him without bothering about receipts.  After buying, I resell the phones. I didn’t know that the phones Idris had been selling to me were stolen ones. He calls me whenever he has a phone for sale. Once I get there, we’ll negotiate. I resell the phones to make profit.”

Ademola claimed that after he realised Idris steals phones to sell, he stopped patronizing him.

The suspect, who claimed to have stopped patronizing Idris after he discovered he was into stealing, destroyed his own alibi. He said: “One day, he called me to come and buy another phone which he had stolen. As I got there, some policemen arrested us. I didn’t see the phone he wanted to sell before the police arrested me.”