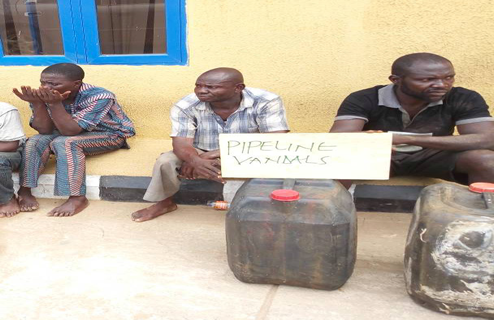 Forty-two-year old truck driver, Mr John Williams, arrested for vandalism of oil pipelines along Magboro area of Ogun State, has pleaded with operatives of the Zonal Intervention Squad (ZIS), Zone 2, Onikan, Lagos State, to do everything humanly possible to arrest his brother.

The angry Williams said that he wouldn’t be in police net if not for his brother, Nnena, who tricked into crime.

Williams said he was at Eric Moore, Surulere area of Lagos, about to load engine oil into his truck, when Nnena called and instructed him to head straight to Ibafo with his truck, to load some fuel products.

Williams said: “Nnena is my brother; I didn’t know he was into oil bunkering.  I didn’t follow them into the creek where they went to load the fuel. If I had known they were stealing government’s product, I would not have followed them.  As I’m speaking with you now, my family members don’t know I had been arrested. Nnena is on the run. Please just arrest Nnena for me, so that he will come and vindicate me.”

The police explained that the suspects, after vandalising pipelines would siphon fuel into gallons and load them into two trucks, which would take them to Lagos. Two other trucks were also intercepted when the suspects were about to offload 33,000 litres of the stolen product into a tanker.

The driver of one of the trucks, James, said he was waiting for his turn to load tomatoes at Mile 12, when Nnena approached and begged him to assist him take some ‘goods’ to Ijora.

James further said: “Nnena promised to pay me N150, 000 to take the goods from Magboro to Ijora. When we got to the place, I was shocked. I smell fuel and I told them that I couldn’t carry it. I didn’t want my truck to catch fire.  They threatened to kill me; they said I had already known their secret. It was because I didn’t want to die that I reluctantly loaded the products into my truck. I drove to Lagos and was arrested there. I noticed four trucks there, loading fuel. I was supposed to load 30,000 litres, but we load 230 litres. It was because of the money they promised me that landed me into this problem.  I pray God should take me out of this problem. I was only looking for how to survive.”

Chikamso, Femi and Garuba, all denied being involved in vandalism. They claimed to be genuine engine oil sellers, operating under Ijora Bridge.

The Assistant-Inspector General of Police (AIG), in charge of Zone 2 Police Command, Adamu Ibrahim, said the suspects would be charged to court.