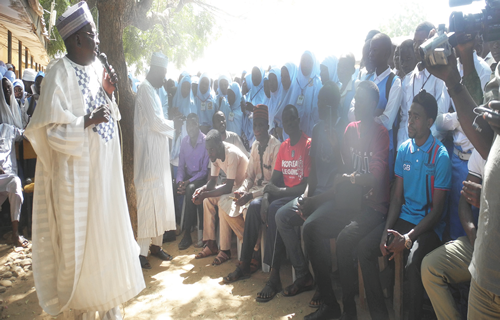 Muslims of Igbo extraction in Nigeria have decried alleged coordinated neglect by the federal and state leaderships of the Southeast geopolitical zone against them.

Rising under the auspices of Southeast Muslims of Nigeria (SEMON), the faithful averred that a situation where Igbo Muslims are made to bear the identity of third class citizens by the federal and state leaderships is very worrisome.

These were parts of resolutions reached by SEMON after its meeting in Abuja where the members agreed to follow all legitimate means to push for their recognition at the federal and state levels as well as attainment of all rights which every citizen of Nigeria is entitled to.

The meeting tagged “need for Peace and Unity in Igboland and Call on the Federal Government to Appoint Igbo Muslims into the Government”, had in attendance prominent and intellectually vibrant Igbo Muslims from across the nation.

The meeting extensively discussed the challenges the Igbo Muslims face in their respective birthplaces in Igboland, their status as citizens of Nigeria, their stand on the agitation by some groups in the Southeast and the recent threats to lives of some members of the Igbo Muslim community by some overzealous persons in the region.

The group, however, mapped out strategies for peaceful coexistence and understanding in their different areas of living.

A communiqué issued by the group was signed by Chairman,  Muhammad O. Ajah Jr; Secretary,

Abdurrahman Nwabueze Urama;  and other representatives  of states of the Southeast living in Nigeria and in Diaspora.

The communiqué read in part: “We commend President Muhammadu Buhari for his dynamic and nationalistic leadership style and urge him to appoint qualified Igbo Muslims in position of trust as Ministers, Ambassadors, Directors-General of federal government agencies and parastatals as well as board members in the federal organs.”

“A situation where Igbo Muslims have been made to bear the identity of third class citizens by the federal and state leaderships is very worrisome. This has been part of the causes for agitations by different groups in Nigeria. We have been peace-loving, responsible and dexterous patriots of Nigeria in our respective states. Many of us have ventured in politics and we participate with all other Nigerians to elect the President of the Federal Republic of Nigeria and other elected representations for our areas.”

Meanwhile, National Hajj Commission of Nigeria ( NAHCON) and Saudi’s ministry of  Hajj have agreed on releasing a  new set of  policies to guide activities of private tour operators prior to kicking  off  2018 Hajj.

The new policies whose details are still being worked out, are to prevent re-occurrence of identified lapses on the part of private tour operators who took part in just concluded Hajj, the  Chairman / Chief Executive Officer of NAHCON, Barrister Abdullahi Mohammed hinted at a  meeting with the leadership of   Association of  Hajj and Umrah Operators of Nigeria  (AHUON) recently in Abuja.

The meeting was at the instance of NAHCON, the first  since  completion of 2017 hajj, to take stock of the exercise and discuss plans for 2018 hajj.

“There is a lot of reforms, new policies to be released by NAHCON and Saudi Ministry of Hajj  in order to strengthen the activities of private tour operators to ensure compliance with best practices and to also ensure that, pilgrims get value for their monies.”

Saudi Ministry of Hajj is worried about poor service delivery by tour operators in the last hajj. We will do the needful to make sure we don’t have a repeat of such incidents in 2018”, said NAHCON CEO, Barrister Mohammed.