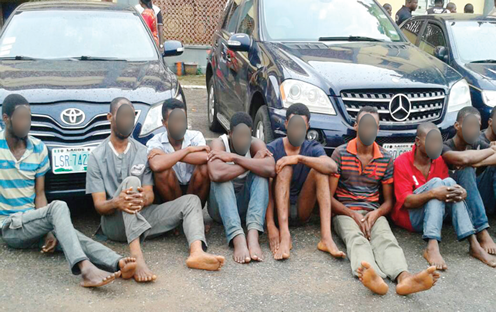 A robbery suspect, Bello Umar 32, yesterday told the police that it was in his blood to rob and do evil things.

Aside from Umar, other suspects are Bala Ahmadu, 35, Isiya Garba, 24, and Isuhu Usman, 20. The police said that the men were part of those that had been terrorizing Magama area. They were said to have been arrested based on a tip-off, given to the police by concerned Nigerians.

The police said: “During interrogation, the suspects confessed to have carried out series of robberies in various parts of the local government area.”

Umar, while narrating his story, said that he regretted getting involved in the crime. He pleaded with police to have mercy on him. He stressed that he couldn’t understand why he commit such crimes.

Umar said:  “I think it is in my blood to do evil things; otherwise, why would I be robbing innocent people? This is not my first time; I have been doing this for years. May Allah forgive me.”

Recounting his own story, Usman, admitted to have committed the crime.

He said: “I voluntarily and willingly committed the crime. Nobody sent me to carry out the act, let the law deal with me. I’m not going to beg anybody for the offence I committed knowingly. Let the government go ahead and jail me because I deserve it.”