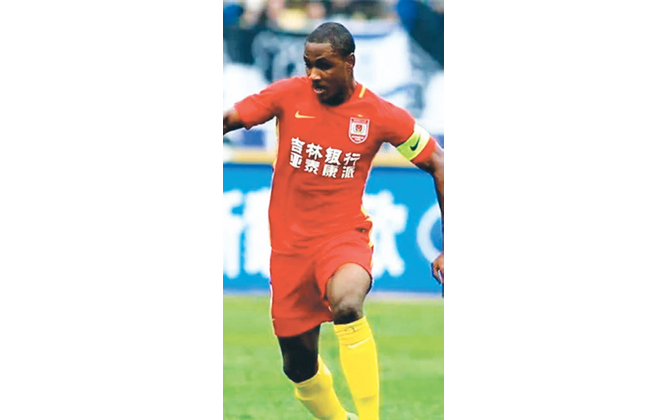 It was a tough day for Super Eagles striker, Odion Ighalo, as he was rushed to the hospital after sustaining injury in his club, Changchun Yatai’s 3-2 defeat against Shanghai Shenhua in the Chinese Super League.
Ighalo scored a brace in the game before he was forced off with an injury in the 73rd minute after receiving a kick to the left ankle joint.
Ighalo is thought to have suffered a recurrence of an old injury following a harsh tackle by an opponent.
He is expected to be on the sidelines for four weeks and should be available for Super Eagles AFCON qualifiers against South Africa on June 10.
Meanwhile, former junior international, Kayode Olanrewaju,scored a career-high 18th goal of the season as he helped his club, Austria Vienna, return to winning ways after finding the net in their 3-0 rout of Mattersburg in the Bundesliga on Sunday.

The ex-Golden Eaglets and Flying Eagles star is Nigeria’s leading scorer in Europe’s top divisions this season. It was also a goal scoring debut for former Super Eagles forward Osaze Odemwingie for his Indonesian club Madura United as his goal helped the team to a 2-0 win over Bali United Pusam.

The former West Brom and Stoke City forward net via the spot in the 74th minute to round up a comprehensive victory for the team he joined last month as a free agent after leaving Rotherham United.

Victor Moses was also in Chelsea’s line up in their 2-0 away defeat suffered against Manchester United on Sunday likewise midfielder, Wilfred Ndidi, who was on from start to finish as Leicester City threw away a 2-0 lead to draw 2-2 against Crystal Palace in Saturday’s Premier League match at the Selhurst Park.