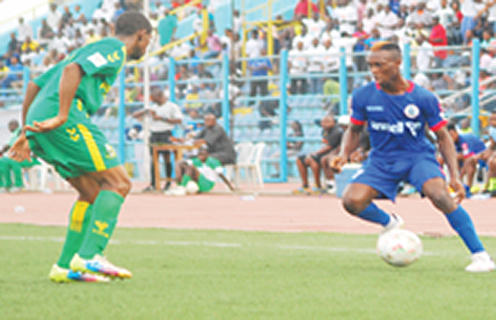 Rivers United on Sunday took a step closer to the group stage of the CAF Confederation Cup after defeating Rayon Sports of Rwanda 2-0 in Port Harcourt.

The Garden City outfit is the only Nigerian team on the continent after the elimination of Rangers who lost 5-2 on aggregates to Zesco United of Zambia at the weekend.

A goal apiece in each half from Emeka Atuloma and Guy Kuemian gave Rivers a 2-0 lead ahead of the second leg tie this weekend in Rwanda.

It would have been 3-0 in the 87th minute when the Rwanda team goalkeeper spills the ball for Kuemian, but the Ivorian kicks the air with empty net gaping.

Rivers will have to be at their best in the second leg and make sure they did not allow what happened in their CAF Champions League final round match when they threw away a 3-0 lead in the first leg to lose 4-3 on aggregates against El-Merreich of Sudan.

A win over two legs will allow Rivers United to qualify for the group stage of the competition. Meanwhile, Nigeria Professional Football League champions, Rangers, were eliminated from the most glamorous CAF Champions League and later the Confederation Cup at the weekend. Rangers lost 5-2 on aggregates to Zesco United.

They had earlier drew the first leg at home 2-2 leading to the sacking of their coach, Imama Amapakabo, before losing the second leg in Zambia 3-0 at the weekend.