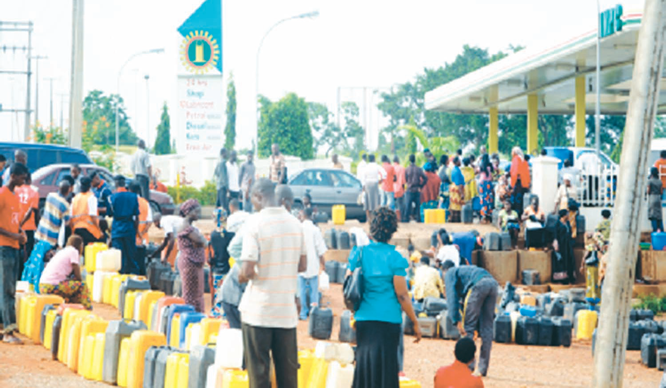 Talks of energy insufficiency facing over 170 million Nigerians crept back to national media space penultimate Tuesday. Coming a few months after Nigeria was officially declared to be in recession, the Federal Government declared that it spent $1 billion to subsidise imported Dual Purpose Kerosene also known as kerosene in 2015.

Vice President, Yemi Osinbajo, who declared this, added that over 95.76 million metric tonnes of firewood was used in the year, signaling a significantly high rate of deforestation.

At a ‘Domestic LPG Implementation Stakeholders Workshop’ in Abuja, organised by the Office of the Vice President, Ministry of Petroleum Resources and the Nigerian Liquefied Natural Gas (NLNG) the nation’s number two man also decried the low usage of Liquefied Petroleum Gas (LPG) also known as cooking gas, in Nigeria, which he considered to be cheaper, cleaner and healthier.

“Government has had to take in huge subsidies, with over $1 billion spent in 2015 on kerosene subsidy. A significantly high rate of deforestation continues to be recorded as over 95.76 million metric tonnes of firewood was used in 2015,” he said.

This is not the first time that the nation has been neck-deep in kerosene subsidy controversy.

In 2014, it was revealed that the Nigerian National Petroleum Corporation (NNPC) allegedly used over 80 per cent of the controversial $10.8 billion (about N1.728 trillion) for subsidy.

Multiple confidential memos showed that the purported subsidy on kerosene was actually in defiance of a subsisting presidential directive to the Ministry of Petroleum Resources and the Group Managing Director of NNPC to remove the payment of subsidy on kerosene from the Petroleum Support Fund (PSF) template.

On June 10, 2009, the late President Umaru Musa Yar’adua had approved the resolutions of the Presidential Committee, which sat the previous day to deliberate on the action plan on the deregulation of the downstream petroleum sub-sector.

The committee, checks showed, had sought the president’s approval of the proposal to ameliorate the likely adverse impact of the then planned removal of subsidies in the downstream sector of the petroleum industry.

The memo to the President, SH/ PSP/24/A/812, had, among several prayers, requested that the petroleum minister be directed to “eliminate existing subsidy on the consumption of kerosene, taking into account that subsidy payments by government on kerosene do not reach the intended beneficiaries.”

In June 2009, a memo, SH/ PSP/24/A/819, signed by the then Principal Secretary to the President, David Edevbie, conveyed the president’s directive to the Minister of Petroleum Resources.

The memo also asked the minister to avoid public announcement of the measure to be implemented. Despite the presidential directive, the NNPC, apparently feigning ignorance of the directive, still  submitted a request for the payment of subsidy on kerosene.

But in another memo, SH/ PSP/24/A/1087, dated October 19, 2009, the president rejected the request, pointing out that based on his earlier directive “the NNPC should not be entitled to make claims from the PSF in respect of kerosene with effect from the date of Mr. President’s approval.” It was not clear if the corporation received the subsidy after the demise of the former president.

However, in July 2011, despite the subsisting presidential directive, the then Minister of Petroleum Resources, Mrs. Alison-Madueke, announced the launch of the Kero-Direct scheme initiated by the NNPC ostensibly to make kerosene available to consumers nationwide at a highly subsidised rate of N50 per litre.

The Pipelines and Products Marketing Company (PPMC), a subsidiary of the NNPC in charge of petroleum products marketing and distribution, was, under the scheme, directed to provide the product sold to consumers using the products distribution facilities of an independent marketer, Capital Oil and Gas Industries Limited.

But the House of Representatives adhoc committee probing the fuel subsidy regime in 2012 had, in its report, described the scheme as “a scam to defraud Nigerians and extort money from the Petroleum Support Fund (PSF).”

The committee had noted that the scheme was not only implemented in defiance of a subsisting presidential directive removing kerosene from the subsidy regime, but also designed in a way the product would not get to the target beneficiaries at the approved price.

The committee said throughout the period, kerosene, which was supposed to be distributed to consumers nationwide at the subsidised price, sold only at the 36 NNPC mega stations out of over 24,000 retail outlets across the country.

Even then, it said the product was never available at that price as there was massive diversion of the product, which was resold to consumers at between N160 and N200 per litre in the open market.

The then Governor of the Central Bank of Nigeria, Sanusi Lamido Sanusi, also faulted the NNPC’s claim that 80 per cent of the $10.8 billion it admitted were unremitted to the federation account was incurred on petrol and kerosene subsidy.

He urged the Senate Committee on Finance not to accept the argument since a presidential directive had in 2009 barred payment of subsidy on kerosene. The directive, from former President Umar Yar’adua, remained in force long after the president’s death.

Sanusi, now the Emir of Kano, said, citing a letter to him from the Petroleum Products Pricing Regulatory Agency (PPPRA) in December 2010 – long after Mr. Yar’adua’s death, which confirmed that the agency had “ceased to grant subsidy on DPK (kerosene) through a presidential directive” since July 2009.

“This may explain why NNPC waited till 2011 to claim its ‘arrears’ for 2009-2011,” he wrote in a document written then, but reviewed by New Telegraph at the weekend.

“So, the first question here is: on what basis did NNPC pay itself billions of dollars as ‘subsidy’ for kerosene, in view of this directive,” the document read.

On petrol subsidy, the former CBN governor said documents showed the NNPC did not make any deductions from the domestic crude sales for subsidy payment between April 2012 and 2013. In the document attached as appendix, the row showing “adjustment for subsidy” consistently showed “NIL” within the period.

There are two possibilities here, he maintained: “Either the NNPC was lying to government that it was not making deductions, or it is now lying that is made when it never did. Either way, this shows we cannot trust NNPC or its management to tell us the truth.”

A third eye sees a scam

A study conducted by a Lagosbased financial consultancy firm, Financial Derivatives Company Limited, also revealed that retail price for kerosene in Lagos and environs from January 2012 to date ranges between N140 and N300 per litre despite the purported subsidy regime.

The study showed that in January 2012, kerosene, which should go for N50 per litre, sold for as much as N300 even in some major towns and cities, which represents about 500 per cent hike, while the prevailing price for the month of February and March 2012 was N250, representing 400 per cent increase. Since April 2012, where available, the price for the commodity till date has continued to oscillate variously between N150, N175 and N225 per litre.

Good for nothing refineries

With a cumulative capacity of 445,000 barrels per day, the four refineries in Nigeria are expected to dip, if not to totally end, the importation of kerosene and the accompanied waste of its subsidy.

They have, however, remained problems on which the nation spends money, instead of being the solution to the reckless importation of refined petroleum product.

The four refineries were, early this year, grounded to zero per cent, shooting the country’s dependence on petrol importation from 40 million litres per day fuel consumption to 100 per cent. Investigation by New Telegraph revealed that this worsened the fuel scarcity the country faced in the first quarter of the year.

The nation’s refineries’ combined output was then completely grounded to zero as the Port Harcourt refinery, which held forth for the four refining assets, also shut down.

The immediate past Group Managing Director, Nigerian National Petroleum Corporation (NNPC), Dr. Ibe Kachikwu, who confirmed this, added that anytime the Port Harcourt refinery was shut down, it brings the combined output from 1.9 per cent to zero.

NNPC had stated in its latest monthly report for September that: “Only Port Harcourt refinery produced 31,008 million metric tonnes of petroleum products out of 35,648 MT (261,371.14 barrels) of crude processed at an average capacity utilisation of 5.77 per cent.”

Kachikwu, who described the poor refining capacity as worrisome, stated that there were machineries in place to restore the lost glory of the refineries and ensure that they contribute massively to the national fuel consumption. “The situation of the refineries is worsening and this is a serious contributor to the ongoing shortage of fuel across the country,” a source at the Port Harcourt refinery added. Still a conduit pipe

Meanwhile, Kachikwu said that the corporation would need about $500 million to fix the refineries and he was determined to source for the fund in the next seven months to one year. “Some people are sabotaging the efforts through pipeline vandalism, but we will block all the leakages and fix the problem,” he assured.

LPG to the rescue

Osinbajo expressed the belief that liquefied Petroleum Gas (LPG) could be of help to end the annual waste on kerosene importation and subsidy. Nigeria’s total domestic LPG usage grew from a low of 50,000 metric tonnes per annum (MTPA) to approximately 400,000 MTPA in 2015 due to NLNG’s intervention and Osinbajo said that Nigeria’s per capital consumption of 2.5 kilogrammes (KG) remains low compared to its peers in Africa.

Maintaining that low consumption of LPG was irrespective of the superior health, environment and energy costs of LPG over kerosene, the Vice President noted that this low level of LPG consumption in Nigeria has resulted in heavy dependence on kerosene and firewood as primary domestic cooking fuels in majority of approximately 36 million Nigerian households.

“Most of the LPG produced in Nigeria, today, is exported,” he said adding that over “40 per cent of our domestic consumption in 2015 was imported.”

He maintained that the huge importation of LPG for domestic consumption impacts negatively on the country’s foreign exchange outlay and also limits domestic supply of LPG. The Vice President further disclosed that LPG has considerable benefits, which include the fact that it is more cost-effective; and provides better health benefits than firewood and kerosene, both of which has been identified has the cause of more than 50 per cent of over 93,000 deaths.

The Federal Government is considering a number of interventions in the LPG industry that would among others lead to a significant reduction in the rate of deforestation and create millions of direct and indirect employment opportunities for Nigerians. “As part of this administration’s commitment to grow the domestic LPG industry, an inter-ministerial committee on the expansion of domestic LPG in Nigeria has been set up, and I have the privilege of chairing that committee.

Corroborating Osinbajo’s view, Minister of State for Petroleum Resources, Mr. Ibe Kachikwu, and Managing Director of Nigeria LNG, Mr. Tony Attah, highlighted the need to culminate all the various gas and LPG policies with the regulatory framework that would boost the business environment.

A successful implementation of the intervention strategies would require an investment of up to $25.2 billion over the next couple of years, Kachikwu said, adding that the investment would be used in providing infrastructure among others.

Attah, in the same vein, maintained that to unlock the potentials of the LPG industry, the Federal Government should intervene by removing fiscal and regulatory bottlenecks necessary for creation of aconducive business environment for private sector investment in all segments of the value chain.

For a country that is struggling to get out of recession, the annual kerosene subsidy rituals, which gulps billions of dollars need to end.

This can only be achieved with selfsufficiency in production of the product. Nigeria is the biggest producer and exporter of crude oil in Africa and no explanation is tenable from its government on importation of petroleum product and billions of dollars spent to subsidise the importation.